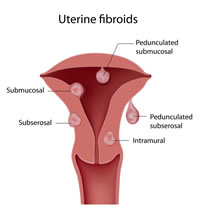 Fibroids are muscular lumps (tumor) that grow in the wall of the uterus (womb). Another medical term for fibroids is “leiomyoma” or just “myoma”. Fibroids are almost always benign (not cancerous). Fibroids can grow as a single tumor, or there can be many of them in the uterus. They can be as small as an apple seed or as big as a grapefruit. In unusual cases they can become very large.

About 20 to 80 percent of women develop fibroids by the time they reach age 50. Fibroids are most common in women in their 40s and early 50s. Not all women with fibroids have symptoms. Women who do have symptoms often find fibroids hard to live with. Some have pain and heavy menstrual bleeding. Fibroids also can put pressure on the bladder, causing frequent urination, or the rectum, causing rectal pressure.

Most fibroids grow in the wall of the uterus. Doctors put them into three groups based on where they grow:

Most fibroids do not cause any symptoms, but some women with fibroids can have:

No one knows for sure what causes fibroids. Researchers think they may be Hormonal or Genetic (runs in families).

Because no one knows for sure, we also don’t know what causes them to grow or shrink. We do know that they are under hormonal control — both estrogen and progesterone. They grow rapidly during pregnancy, when hormone levels are high. They shrink when anti-hormone medication is used. They also stop growing or shrink once a woman reaches menopause.

Most women with fibroids have normal pregnancies but are more likely to have problems during pregnancy and delivery.

The risk of needing a caesarian section is six times greater for women with fibroids.

The risk of placental abruption, where the placenta breaks away from the wall of the uterus before delivery is increased.

All obstetricians have experience dealing with fibroids and pregnancy. Most women who have fibroids and become pregnant do not need to see an OB who deals with high-risk pregnancies.

Sometimes your doctor can feel the fibroid as a (usually painless) lump or mass on the uterus.

If you have fibroids but do not have any symptoms, you may not need treatment. Your doctor will check during your regular exams to see if they have grown.

If necessary, fibroids can be treated surgically or with medications.

Previous
Next
Book now Enquiry
This website uses cookies to ensure proper functionality. By clicking 'I accept' you are agreeing to the use of cookies. More info